War Between the States

War Between the States to the 20th Century
Leaders for Both Sides
Lebanon provided leaders for both sides during the war between the states. Alexander P. Stewart, a West Point graduate and professor at Cumberland University, whose home appears left, became the highest ranking Confederate General from Tennessee. Robert Hatton, a local politician and lawyer, was the first commander of the 7th Tennessee, the Confederate Regiment with the largest number of Wilson County soldiers. Former Governor and Mexican War hero, William B. Campbell, remained a Union supporter with the rank of general. 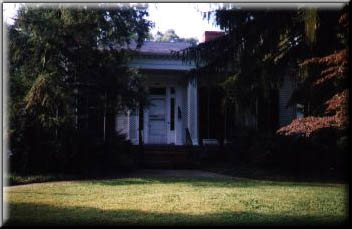 Federal Calvary vs Confederate Calvary
On May 5, 1862 the Public Square, the west side seen in this 1859 photograph, became a battleground when the Federal Calvary surprised the Confederate Cavalry of John Hunt Morgan at dawn. Morgan and most of his men escaped to the east while some barricaded themselves in the Odd Fellows Hall, the high roofed building in the distance, and continued to fight. 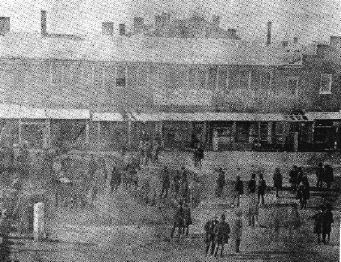 Railroads
In the 1870s the Nashville, Chattanooga and St. Louis railroad operated a line from Nashville to Lebanon. The Depot and Cargo Facilities, south of the Square, appear beyond the cedar log yard.

Caruthers Hall
Robert L. Caruthers built Caruthers Hall in 1878 as the home of the Cumberland University Law School in memory of his brother, Abram, its first professor of Law. Known as the "Law Barn," it produced prominent jurists into the mid-twentieth century. 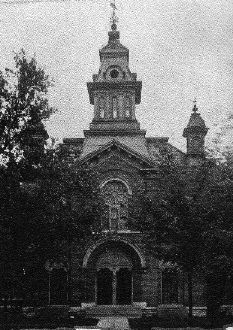 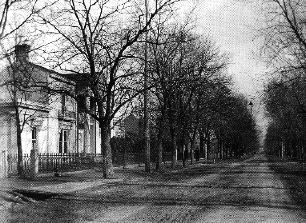 Mule Day Sales
The Square was the location of the Mule Day Sales each first Monday of the month. The view in 1896 shows the steeples of the Methodist and Baptist Churches on East Main Street in the distance. 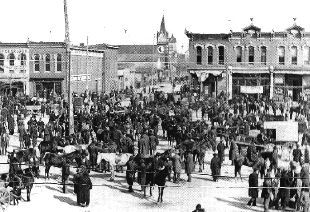