Production of Natural Gas
Information from the Department of Energy
Natural gas is, in many ways, the ideal fossil fuel. It is clean, easy to transport and convenient to use. Industrial users use almost half of the gas produced in the U.S. A large portion is also used in homes for heating, lighting and cooking. However, there are limits on how much natural gas we can find and get out of the ground with today’s technologies.
Research
Researchers are continuing to study about how natural gas was formed and where it was collected within the earth’s crust. They have found that gas is not only found in pockets by itself but in many cases, with oil. Often, both oil and gas flow to the surface from the same underground formation.

Like oil production, some natural gas flows freely to wells because the natural pressure of the underground reservoir forces the gas through the reservoir rocks. These types of gas wells require only a “Christmas tree” or a series of pipes and valves on the surface, to control the flow of gas.

Pumping Systems
Only a small number of these free-flowing gas formations still exist in many U.S. gas fields, however. Almost always, some type of pumping system will be required to extract the gas present in the underground formation.

One of the most common is the “horse head” pump which rocks up and down to lift a rod in and out of a well bore, bringing gas and oil to the surface.

Reservoir Improvements
Often, the flow of gas through a reservoir can be improved by creating tiny cracks in the rock called “fractures” that serve as open pathways for the gas to flow. In a technique called “hydraulic fracturing”, drillers force high-pressure fluids (like water) into a formation to crack the rock. A “propping agent”, like sand or tiny glass beads, is added to the fluid to prop open the fractures when the pressure is decreased.

Some of theses formations are more difficult and more expensive to produce then others, but they hold the potential for vastly increasing the nation’s available gas supply.

Department of Energy Research
The Department of Energy is funding research into how to obtain and use gas from these sources. Some of the work has been in Devonian shales, which are rock formations of organic rich clay where gas has been trapped dating back nearly 350 million years (to the Devonian Period), these black or brownish shales were formed from sediments deposited in the basins of inland seas during the erosion that formed the Appalachian Mountains.

Devonian shale actually gave birth to the natural gas industry in this country. The first commercial natural gas well was drilled into a shale formation in New York. It produced only a few thousand cubic feet of gas per day for 35 years, but heralded a new energy source. 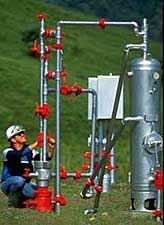 Tight Sand Lenses
Other sources of unconventional gas include “tight sand lenses”. These deposits are called “tight” because the holes that hold the gas in the sandstone are very small. It is hard for the gas to flow through these tiny spaces. To get the gas out, drillers must first crack the dense rock structure to create ribbon-thin passageways through which the gas can flow.

Coalbed methane gas that is found in all coal deposits was once regarded as only a safety hazard to miners but now, due to research, is viewed as a valuable potential source of gas.
Methane Hydrate
Energy Department funded scientists are studying the causes of a type of gas, called methane hydrate, found in deep ocean beds or in cold areas of the world, such as the North Slope of Alaska or Siberia in Russia. A methane hydrate is a tin cage of ice, inside of which are tapped molecules of natural gas.

Research is also continuing on a theory that gas pockets that were not formed from decaying matter but were formed during the creation of the Earth may be found deep in the ground.

Once natural gas is produced from underground rock formations it is sent by pipelines to storage facilities, then by smaller pipes to homes and factories.

So the next time you see the blue flame on top of the kitchen stove, remember that the natural gas that is being burned likely came from an underground rock formation hundreds if not thousands of miles away.